Description from the publisher:

This book was awarded First prize by the Muslim world league at world-wide competition on the biography of the Prophet held at Makkah Al-Mukarramah in 1399 H/1979.

Muhammad (S) is the Messenger of Allah, and those who are with him, are severe against the disbelievers, and merciful among themselves. You see them bowing and falling down prostrate (in prayer), seeking bounty from Allah and (His) Good Pleasure. The mark of them (i.e. of their Faith) is on their faces (fore heads) from the traces of prostration (during prayers). This is their description in the Taurah (Torah). But their description in the Injeel (Gospel) is like a (sown) seed which sends forth its shoot, then makes it strong, and becomes thick and it stands straight on its stem, delighting the sowers, that He may enrage the disbelievers with them. Allah has promised those among them who believe and do righteous good deeds, forgiveness and a mighty reward (Paradise). (Al-Fath: 29)

The Prophet Muhammad (S) said: “The example of guidance and knowledge with which Allah has sent me is like abundant rain falling on the earth. Some of which was fertile soil that absorbed rain-water and brought forth vegetation and grass in abundance. (And) another portion of it was hard and held the rain-water and Allah benefited the people with it and they utilized it for drinking, (making their animals drink from it) and to irrigate the land for cultivation. (And) a portion of it was barren which could neither hold the water nor bring forth vegetation (then that land gave no benefits). The first is the example of the person who comprehends Allah’s Religion (Islam) and gets benefit (from the knowledge) which Allah (Azawajal) has revealed through me (the Prophet) and learns and then teaches it to others. The (last example is that of a) person who does not care for it and does not take Allah’s Guidance revealed through me (he is like that barren land).” (Al-Mukarramah)

Publishers Note The heart of every Muslim is filled with love for the last Prophet Muhammad (S) and this love of the messenger of Allah is an asset for him. Love and respect of a person depends on the benefits we get from him, As the Prophet , is the greatest benefactor of humanity, every Muslim has deepest love for him, Every deed of his life is to be followed by every individual of the Muslim Ummah. Highest love for the Prophet (S) ‘, is made a test of our Faith. Allah the All-Mighty has described and explained the status of Muhammad (S) in the Qur’an:

Love of Allah’s Messenger (S) is a part of our Faith. There is a Hadith (tradition) of the Prophet (S) who said:

“None of you has Faith unless I am dearer to him than his father and his son and all mankind.”

In the early period of Islam, many books were written on the life of the Prophet °,, in the Qur’an itself, the best example of the life of Muhammad (S), has also been mentioned, The Qur’an says:

Someone asked ‘Aishah (R) about the noble character and manners of the Prophet (S). She answered: “Have you not read the Qur’an? His character is a complete explanation of the Qur’an.”

It means that whatever is commanded and prohibited in the Qur’an, its practical example is present in the manners of Muhammad In other words, the ideal and perfect example of good manners and character which the Qur’an demands from mankind, was present in the person of Muhammad in its highest degree.

Scholars of Ahadith (traditions) and writers of the biography of Muhammad , the Messenger of Allah, have explored his life from every angle and aspect from birth to death. Every event, every incident of his life has been described and narrated, but none had claimed that he has given his life’s recording its full rights. Hundreds of books have been written on the life of Muhammad and this endeavor will continue till the Day of Resurrection.

No doubt The Sealed Nectar (Ar-Raheeq AI-Makhturn) is a book of great value and praiseworthy work on the life of Muhammad. This book has been written by the Eminent Shaikh Safiur-Rahman Mubarakpuri of Jamiah Salafiyah, Banaras (India). The first Islamic Conference on Seerah (biography of the Prophet) was held in 1976 in Pakistan sponsored by the Muslim World League. The League announced a world contest for writing a book on the life of the Prophet. One hundred fifty thousand Saudi Riyals (SR 150,000) (forty thousand U.S. Dollars) was the grand prize for the best five books.

One hundred and seventy-one manuscripts were received from all over the world. Out of these, eighty-five were in the Arabic Language, sixty-four in Urdu, twenty-one were in English and one in French and Hausa.

A board of highly qualified scholars judged the manuscripts and announced the results. The manuscript of Shaikh Safiur-Rahman Mubarakpuri, Jamiah Salafiyah Banaras (India), author of the book in hand (The Sealed Nectar) received first the grand prize of SR 50,000 (fifty thousand Saudi Riyals) for its authentic and sound collections of the narrations. Dr. Majid Ali Khan, New Delhi, India, placed second. The third prize went to Dr. Naseer Ahmed, Islamic University, Lahore, Pakistan. The fourth prize was awarded to Mr. Harnid Mahmud of Egypt. The fifth and final prize was awarded to Abdus-Salam Hashim of Madinah Munawwarah. An extravagant prize distribution ceremony was held at Makkah Al-Mukarramah on 12 Rabi’ul-Awwal 1399 A.H. (1979 C.E.). Afterwards, the book was published by the Muslim World League and then many other organizations gained the honor of publishing this masterpiece. Darussalam also published this book in the Arabic language. I had wished to publish this book in the English language for the wider benefit of humanity. Shaikh Safiur-Rahman willingly agreed to the idea and consented to publish the English translation. The stage of translation was traversed with the help of brother Mahir Abu Dhahab, owner and general manager of Markaz Noor Ash-Sham in Damascus, Syria.

For the first edition of this book, brother Mahir Abu Dhahab from Syria, Damascus, provided his help and cooperation as regards the translation work for which I offer my special thanks to him. Now in your hands is the new revised edition with many changes and additions. Brother Abu Khaliyl (U.S.A.) amended and improved the translation to make its language simple and easy, besides comparing again from the beginning to the end the English translation with the Arabic revised text to update the changes therein.

So, after a coherent toil of months, this edition was published. (All praise is for Allah). The opinions and views from the readers concerning this edition will be appreciated.

Your brother in Islam, Abdul-M 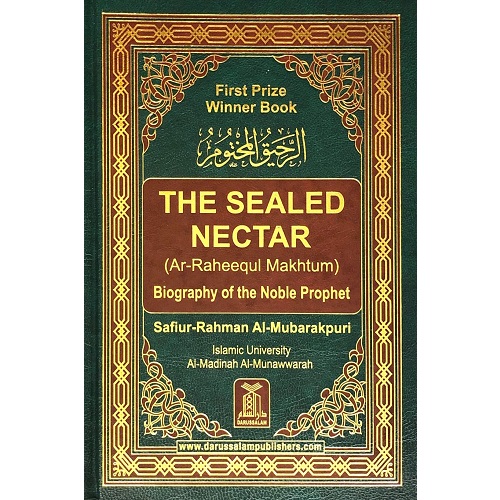 You're viewing: The Sealed Nectar: Biography of the Prophet (Leather Bound) ₦8,500
Add to basket
Sign in Create an Account
Lost your password?
Shopping cart close