To read the Arabic text of the Qur’anic Verses in their correct form is of prime importance to every Muslim, as the meanings of the Arabic words are changed with little changes of the diacritics. So, to help those readers and reciters who are not too familiar with the Arabic language or cannot read Arabic, Darussalam has prepared this edition of the Noble Qur’an inserting the transliteration of the Noble verses along with their translation.

It is hoped that this presentation will be of great help and benefit in this regard. June 2010 Edition: This new reprinted edition is a special order received by an air shipment. It does not contain the bonus CD or the blue cover. PREFACE All praise and thanks are Allah’s, the Lord of Alamin (mankind, jinn and all that exists) and peace be upon the Master of the Messengers, Muhammad (S). This interpretation of the meanings of the Noble Qur’an has been revised and the following changes have been made: Each Verse has been put separately with its English interpretation.

The Arabic text of the Noble Qur’an has been taken from Mushaf Al-Madinah An-Nabawiyyah, which has been printed by the Mujamma’ of King Fahd of Saudi Arabia for the printing of Al-Mushaf Ash-Sharif in the year 1405 A.H., according to the instructions of the Vice-Chancellor of the Islamic University, instead of the old Arabic text of the previous print of this book which was printed in the United States and Turkey, by the Turkish Calligrapher Sheikh Hamid Al-Amadi. There are some additions and subtractions of Chapters and Ahadith from Sahih Al-Bukhari and other Ahadith collections. 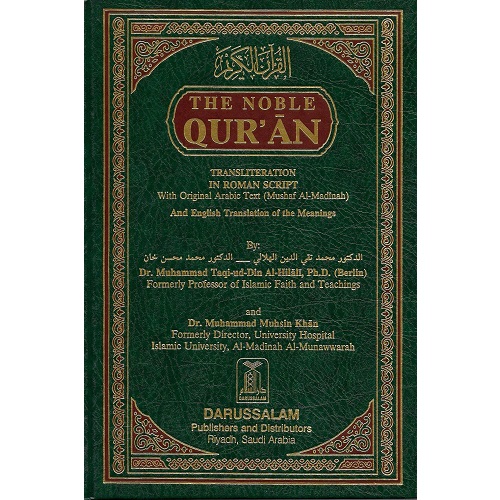