This adorable book begins with a history of “The Three Musketeers” and moves to a plot summary. The rest of the book consists of a comic book type retelling of the classic tale featuring all of your favorite Disney ducks! In parody of “The Three Musketeers”, the well-known characters take the form of (a less than brave) Donald Ducktargnan, the Three (lazy) Musketeers, Huey, Dewey, and Louie, and Monsieur de Treville’s alter ego played by (typically rich and stingy) Uncle Scrooge.

In this version, the Musketeers prefer to throw dirty in the guards’ eyes rather than use their swords to defend themselves, and the love story is played out between Queen Daisy Duck and Gladstone Gander, Duke of Buckingham. When Ducktargnan goes rushing off to England on his rescure mission, he is helped by Gyro Gearloose who invents an iron horse that runs on steam. As in the original, the story ends with the prospect of further adventures ahead. 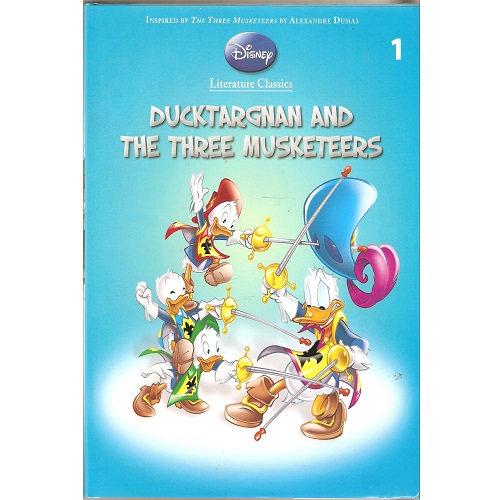