The Swallows of Kabul By Yasmina Khadra

Since the ascendancy of the Taliban the lives of Mosheen and his beautiful wife, Zunaira, have been gradually destroyed. Mosheen’s dream of becoming a diplomat has been shattered and Zunaira can no longer even appear on the streets of Kabul unveiled. Atiq is a jailer who guards those who have been condemned to death; the darkness of prison and the wretchedness of his job have seeped into his soul. Atiq’s wife, Musarrat, is suffering from an illness no doctor can cure. Yet, the lives of these four people are about to become inexplicably intertwined, through death and imprisonment to passion and extraordinary self-sacrifice.

The Swallows of Kabul is an astounding and elegiac novel of four people struggling to hold on to their humanity in a place where pleasure is a deadly sin and death has become routine.

“Like Khaled Hosseini’s The Kite Runner, this is a superb meditation on the fate of the Afghan people.” —Publishers Weekly

The introduction, discussion questions, suggestions for further reading, and author biography that follow are designed to enhance your group’s discussion of Yasmina Khadra’s The Swallows of Kabul. Set in Afghanistan under the rule of the Taliban, it is a moving portrait of a society in which “death is only a banality”[p. 10] and “pleasure has been ranked among the deadly sins” [p. 31].

From brutal battles with Soviet troops to the rise of the Taliban theocracy, to the American invasion in the wake of 9/11, Afghanistan has become a potent symbol of the political and religious realities shaping the landscape of the twenty-first century. The Swallows of Kabul puts a human face on the horrors and repression of that war-torn country. It tells the story of two couples–Mohsen and Zunaira Ramat, born into the privileged classes of pre-Taliban Afghanistan, and the prison guard Atiq Shaukat and his wife Musarrat, raised in poverty and drawn into the jihad in hopes of bettering their lot in life.

Mohsen once hoped for a career as a diplomat, but now he aimlessly wanders the devastated streets of Kabul. On one such desultory excursion he comes upon the stoning of an adulteress and finds himself joining the frenzied crowd. The next day Zunaira, anxious to assuage her husband’s guilt and her own shock, capitulates to his pleas to accompany him to the marketplace, the first outing she has made in months. But the burqa she hides behind cannot protect them from the harassment of zealous Taliban soldiers, and their marriage, already frayed by Mohsen’s act of violence, collapses under the strain of new resentments and suspicions. The shadow of the Taliban darkens the lives of Atiq and Musarrat as well. Worn out by years of war and deprivation, Musarrat is slowly succumbing to an incurable illness and Atiq to despair, which corrodes his faith in the mullahs and threatens to destroy his soul.

In lucid, lyrical prose, The Swallows of Kabul carries us into a land of mind-numbing fear and harrowing hardship and reveals the possibilities for love and compassion that simmer beneath the surface.

Questions and Topics for Discussion

1. Khadra depicts the city of Kabul in exquisite detail. How does the language the author uses turn the city into a presence as vital and as memorable as the people who inhabit it? In what ways does the physical environment mirror the inner lives of the characters?

2. How do small passing moments or incidents bring to life the atmosphere of Kabul? How do the descriptions of the marketplace [p. 19] and the services at the mosque [pp. 40–42 and pp. 93–97], for example, reinforce the fear and sense of claustrophobia that engulfs the city and its population?

3. Why does Mohsen experience “an access of unfathomable joy” [p. 14] when his stone strikes the condemned woman? Is he simply swept away by the fervor of the crowd, or does the incident reflect a deeper need of his own? Is scapegoatism a natural, if highly regrettable, human impulse? What purpose might it serve in society?

4. What does Mohsen hope to gain by revealing his participation in the stoning to Zunaira? Why does he “understand that he should not have confided to his wife what he refuses to admit to himself” [p. 38]? From what you know about Mohsen and the dynamics of his marriage, would it have been possible for him to keep his actions a secret? Why does Zunaira remain silent in the face of Mohsen’s appalling confession?

5. Zunaira has steadfastly refused to leave her home or wear the burqa that “cancels my face and takes away my identity and turns me into an object” [p. 77]. Why does she give in to Mohsen’s insistence on taking a walk? Is she persuaded by his arguments, or does her decision come from the desire to heal the breach between them? How does Khadra build a sense of uneasiness and impending disaster in the description of their outing? What aspects of Mohsen’s behavior turn Zunaira against him? Why does the experience of waiting for him [p. 98] affect her so profoundly? What does she learn about herself and her ability to survive the intolerance that defines her world? What is the significance of her decision “never again to remove her burqa” [p. 125]? Is it a sign of defeat or defiance?

6. Is Atiq’s businesslike acceptance of his job and his complicity in the deaths of innocent people an unforgivable moral failing? Do his circumstances—including his wife’s illness, as well as his increasing misgivings about his position as jailer [p. 18]—mitigate his culpability? Do the conditions in Kabul necessitate the suspension of the usual ethical rules? Do readers also need to modify or even suspend ordinary judgment in evaluating the characters and events in the novel?

7. Initially, we see Musarrat through Atiq’s eyes [pp. 26–27]. Do the face-to-face interactions between husband and wife [pp. 53–58] change your impressions of her and of the nature of their marriage? At what point in the novel does Musarrat’s character come into her own?

8. What qualities do Musarrat and Zunaira share? What are the differences between them? To what extent are these differences attributable to their respective ages, social position, education, and religious beliefs?

9. Are the issues confronting the two couples universal? How has the situation in Kabul increased the harm and hurt in their relationships? Have their marriages been strengthened in any way by their dire circumstances?

10. In addition to the main plot, Khadra presents the stories of Mirza, Nazeesh, and Qassim. In what ways do these vividly drawn secondary characters expand your understanding of Afghan culture, history, and values? What, for example, does Mirza’s advice to Atiq to divorce his wife [pp. 26–27] suggest about the willingness of some Afghans to accept the fundamentalists? What insight does Qassim’s character offer into the brutalizing effects of war and tyranny? How does Khadra bring out Qassim’s human side? Nazeesh, once a mullah respected for his erudition, “was found one morning stalking along the avenues, wildly gesticulating, drooling, eyes bulging” [p. 65]. Does Nazeesh—both a holy man and a madman—see the transformation of his country in a way that eludes the other characters?

11. Compare the sermon delivered by Mullah Bashir [pp. 94–95], Qassim’s speech about destiny [p. 118], and Musarrat’s musings about her fate [p. 119]. What do these passages demonstrate about the various ways religious teachings can be interpreted?

12. In the context of the novel, has the Islamic clergy abandoned its religious mission and its moral responsibilities? Drawing on what you have read about the rise of fundamentalism in Afghanistan and other countries, do you think that this is an accurate picture? What light does the novel cast on the differences between devout faith and fanaticism?

13. The loss of intimacy is perhaps the most devastating effect of the Taliban’s rule. In addition to the troubled marriages of the main characters, how is this theme woven into the novel?

14. References to swallows occur throughout the book, sometimes in literal descriptions and at other times, as metaphors for the women draped in burqas. Why is the juxtaposition of the literal and the metaphorical significant in the context of the novel’s themes? What do the swallows symbolize? Do they suggest different things at different times?

15. From the stoning of the adulteress at the beginning of the novel to the stoning death at the end, The Swallows of Kabul presents many images of physical violence. What other kinds of violence does Khadra explore? Can the demeaning treatment of women, the suppression of free expression and movement, and the imposition of extreme religious orthodoxy also be defined as violence?

16. After the attacks of 9/11, America invaded Afghanistan, ending the rule of the Taliban. Despite continuing unrest, Afghanistan held free elections in the fall of 2004. What aspects of Afghan culture might undermine this step toward democracy? Can a Western military presence, as well as Western political and economic pressures, offer lasting solutions to the issues Khadra raises in the novel?

17. In the preface, Khadra writes that the story about to unfold is “like the water lily that blooms in a stagnant swamp” [p. 3]. Which character—or plot element—represents the lily? Despite its darkness, is The Swallows of Kabul ultimately a novel about hope and the possibility of redemption?

18. The author, Mohammed Moulessehoul, was an Algerian army officer who originally wrote under his wife’s name, Yasmina Khadra, to avoid military censorship. Why does he continue to use the feminine penname, although he has retired from the army and now lives in France? What does this suggest about his views and on his role as a writer?

Yasmina Khadra is the nom de plume of the former Algerian army officer Mohammed Moulessehoul, who is the author of two other books published in English, In the Name of God and Wolf Dreams. He took the feminine pseudonym to avoid submitting his manuscripts for approval by military censors while he was still in the army. He lives in France. 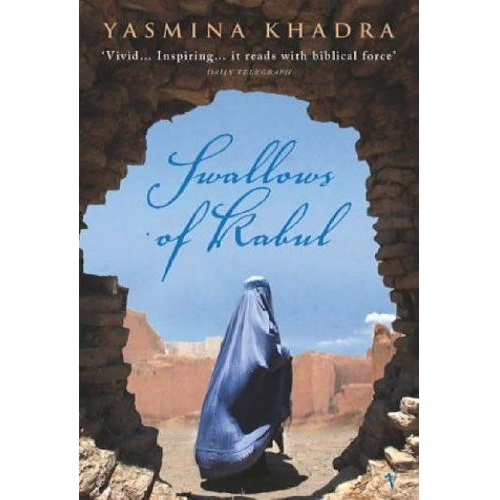