Good Argumentation With the Doubters of Islam By Shaykh Subh

These questions were sent by some Christian missionaries intending to distort the image of Islam and challenge Muslims thereby.

Good Argumentation With the Doubters of Islam By Shaykh Subh

The book in hand is based on a certain occasion. During my visit to USA, on 21 December 1997, as I was invited by the board of administrators of Abu Bakr As-Siddiq Mosque in Brooklyn, New York, my intimate friend, Hamid Nabawi, presented some questions to me. These questions were sent by some Christian missionaries intending to distort the image of Islam and challenge Muslims thereby.
Undoubtedly, their attempts were in vain for they behaved like a naive man who strikes a piece of steel with his .head thinking he could split it.

It is noteworthy that the challenge of these Christian missionaries was supported by the following two factors:

i) Those missionaries have gotten partial knowledge of Islam, which, in turn, led them astray. Generally speaking, when knowledge adheres to whims, it will be
more harmful than ignorance itself.

ii) The opponents of these missionaries have had no profound knowledge of  Islam. They shouldered the task of defending Islam due to the lack of
outstanding scholars in their countries. Their shortcomings, however, were revealed in many aspects. Following are some of these:

1- They were not well-acquainted with their status quo as well as their beliefs.

2- They erroneously thought that all those who disagreed with them in following their religion, Islam, had to be fought, killed, and boycotted.
In so doing, they would defame the image of Islam.

3-Their women’s state reflected their misunderstanding of Islam. Rather, what they used to acquire from Western women who wanted to know Islam presented their unawareness of the characteristics of Islam, even unwillingly and with good intention. 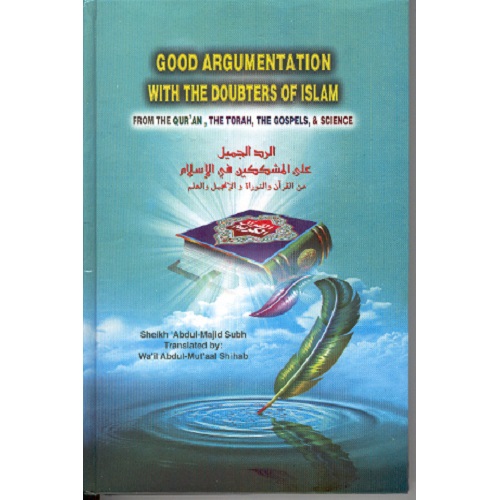 You're viewing: Good Argumentation With the Doubters of Islam By Shaykh Subh ₦1,500
Add to basket
Sign in Create an Account
Lost your password?
Shopping cart close