The Trillion-Dollar Enterprise : How the Alliance Revolution Will Transform Global Business

Beyond the multinational corporation—even beyond the mega-corporation built from aggressive mergers and acquisitions—a new form of global business is emerging, and it is changing the competitive landscape forever. In his visionary book, The Trillion-Dollar Enterprise, Cyrus Freidheim offers a front-row seat to this seismic shift, through which a few dominant enterprises will control two-thirds of the global market in their respective industries. But they won’t be corporations as we’ve known them. They will be vast networks of corporate alliances—global coalitions of independent firms acting in concert as single entities, and combining assets that exceed the entire output of many nations.Drawing from fifteen years of groundbreaking research at Booz-Allen & Hamilton, Freidheim convincingly demonstrates that the rise of networks of this magnitude is natural and inevitable, as companies forego traditional—and riskier—methods of expansion in favor of alliances, joint ventures, and other collaborative arrangements that capture the best capabilities of the participants while avoiding the bureaucratic disadvantages of size. Already, we are witnessing the convergence in industries as diverse as telecommunications, aerospace, and commercial aviation into alliance networks, clustered around a few dominant players. For example, the global airline industry is coalescing around networks, led by United and Lufthansa in the Star Alliance and by American Airlines and British Airways in another.From the global stage, Freidheim takes up deep into the heart of ”Trillion-Dollar Enterprises” in development, identifying the key elements of successful network formation, and outlining new roles and responsibilities for managers, executives, teams and boards. Freidheim ultimately calls for revolutionary changes in how business leaders should be educated and rewarded, as the skills of diplomacy and negotiation take priority over functional expertise.In his provocative conclusion, Freidheim takes us twenty-five years into the future to explore looming public issues as the forces of commercial globalization and political sovereignty collide, challenging existing paradigms of anti-trust, trade, and labor policies—and even national security. 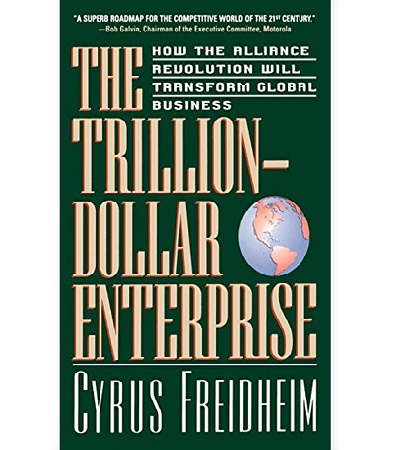 You're viewing: The Trillion-Dollar Enterprise : How the Alliance Revolution Will Transform Global Business ₦1,500
Add to basket
Sign in Create an Account
Lost your password?
Shopping cart close